Alumni Spotlight: How the Wadyals Built their Future at AUC

More than a decade after they first met at AUC, Raj and Crystal Wadyal, MD '09 now live with their family in South Barrington, IL, practicing psychiatry and obstetrics/gynecology respectively. 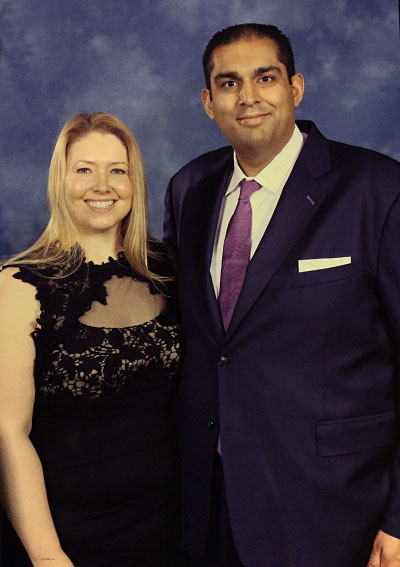 2009 grads Shubhrajan “Raj” Wadyal, MD and Crystal (Jones) Wadyal, MD first met in biochemistry class at AUC. He asked her out, and… she turned him down. But her heart melted when he walked to the convenience store and bought groceries for her (she’d twisted an ankle while running) and cooked her a mean plate of Minute Rice.

Ten years after graduating, the couple live with their three daughters in Chicago. Crystal is a practicing obstetrician/gynecologist at St. Alexius Medical Center/AMITA Health and Northwest Community Hospital, and Raj is a child and adolescent psychiatrist, serving as the Director of Autism Services at AMITA Health.

AUC is special to the Wadyals for several reasons, not least because they graduated with both an MD and a marriage license. For both grads, AUC was an inflection point in their lives—a time when their dreams for the future solidified into something tangible, as did their confidence to follow them through. “My marriage, my career, and my identity as a person were all built at AUC,” Raj says.

A Lesson for Life

Neither Crystal nor Raj knew exactly what to expect when they first boarded their planes bound for St. Maarten—hers from Texas, where she graduated from Lamar University on a biology scholarship; his from Long Island, New York, where he'd first begun shadowing physicians in high school.

But once they stepped into the university apartments overlooking the lagoon, the air seemed to tingle with a sense of possibility.

“I remember the first night we went out on the balcony. I saw the beach on one side, the school on the other side, and I just said, ‘I cannot believe that I’m here,’” Crystal says. “I also couldn’t believe the stack of books I was expected to learn.”

After the fateful Minute Rice dinner, the two bonded over their classes, powering through marathon study sessions together, bemoaning the tough subjects and celebrating their victories—like when their research poster took first place at an AUC student symposium. Their work was published in an international anatomy journal, and Crystal was able to travel to Austria to present at a conference.

But they also found fulfillment in smaller successes throughout their time at AUC. One such pivotal moment centered around a physiology final that Raj was dreading. A lot was riding on this: Due to a lower grade on a previous exam, he needed to earn 92.5% on the final to pass the course—which meant a maximum of three questions wrong.

For three weeks, Raj spent every minute of his spare time studying physiology, barely sleeping or leaving his room. And the reward was sweet: He got a perfect score. But what Raj took away from it went beyond any single assessment or course.

“From then on, I knew that if I applied myself, I could do anything,” he said. “I had this huge sense of accomplishment that stayed with me. If I could move to another country and learn something that difficult, I could be persistent and successful in the rest of my work too.”

Crystal applied to residency first and matched into OB/GYN at Louisiana State University. Raj did a large part of his fourth year at LSU and stayed on for psychiatry residency and fellowship. There, he served as president of the residency council, which represents all residents in the hospital, and held a seat on the LSU admissions committee.

“The position had never gone to someone outside of a surgical subspecialty, and never an international medical graduate,” Raj said. “I was fortunate enough to be elected, and it launched me into the idea of having leadership roles.”

During fellowship, Raj was heavily involved in a research study that resulted in two new treatments for symptoms of autism, and which quickly gained national prominence. Soon after, he was offered the opportunity to help open a new autism center at AMITA while continuing to treat patients and conduct research. Today, he receives patient referrals everywhere from local Chicago hospitals to cases around the world.

“It’s still amazing to me—the intersection of science and humanity, watching neurotransmitters become behavior. Having a mother tell you that nobody has been able to help her child with autism before, but he just called her ‘Mommy’ for the first time. I can’t think of a better or more rewarding job than to help someone like that,” Raj says.

Crystal’s passion for her specialty is just as strong. Ever since meeting her sister’s obstetrician before coming to AUC, she’s been enamored with the role that OB/GYN physicians are able to play in the lives of patients and their newborns.

“During rotations, I found a lot of different things that I liked, but I always came back to OB/GYN,” Crystal says. “It just fits me. It’s surgery, it’s primary care, it’s joy.”

Inspiring the Next Generation

The Wadyals have returned to Sint Maarten multiple times since graduating in 2009. During one trip, Raj delivered the keynote address for AUC’s White Coat Ceremony, welcoming new students with motivational words at the beginning of their medical education. And he continues to encourage students to believe in themselves so that they can realize their full potential.

“I went from being a kid who struggled with the MCAT to a being a leader in autism,” Raj says. “Don’t quit. Don’t let anyone tell you what you can and can’t do.”

Crystal agrees, emphasizing that becoming a physician is not only a personal act of fulfillment, but will always be invaluable to society.

“The world needs doctors desperately,” she says. “Go for the gold. Be the best.”

Looking back at their AUC experience, the two are grateful not only for the education they received, but also for the community they became part of.

“I’d like to thank our professors. They were so supportive and available to us,” Raj says. “Whatever we needed, they went above and beyond to help us. And I still think back to specific lectures all the time when I’m treating patients.”

“And it’s not just the professors—it’s the people in the offices, the staff on campus, the security guards at the gate. All of these people helped us on our way,” Crystal adds. “You create lifelong friendships at AUC. Your class will become your family.”

Raj agrees. “Now every time we land over Maho,” he says, “it feels like coming home.”