Heather Christopherson, MD ’17 always had deep respect for the medical profession, but she didn’t necessarily see herself in that white coat. Turns out, she could—and did—go to medical school, after all.

“I never really considered myself as someone who could go to medical school,” said Dr. Christopherson, a Phoenix, AZ native. “Women in my family tend to be entrepreneurs or stay-at-home moms. We work really hard, but no one ever went onto graduate school.”

Today, she’s a freshly minted AUC grad, who just matched into her first-choice residency: University of Texas-Houston’s internal medicine program. She hopes to pursue a fellowship in gastroenterology after completing residency.

From Fashion to Formaldehyde

For a while, it seemed as though Dr. Christopherson would fall in line with the business endeavors favored by her family. She started a boutique with her sister in Scottsdale, Arizona and sold handbags, later expanding to a wholesale business and a storefront. Business thrived, and Dr. Christopherson enjoyed the work. But as time went on, she found herself questioning her career path.

“I had an inner voice saying, ‘Is this really what you want to do for the rest of your life?’” said Dr. Christopherson. “I thought, there has to be something that I could do and be really proud of, and that would also fulfill my interests.”

Around this time, she began spending more time with her stepfather, an oral and maxillofacial surgeon. She started to fully appreciate what it meant to be a doctor and how rewarding it could be. Quite unintentionally, Dr. Christopherson had found her new profession.

Now that the idea had surfaced in her mind, it was impossible to ignore. But Dr. Christopherson agonized over what to do next. Not only would pursuing medicine mean leaving the business she had known since high school, it also meant giving up a steady income for a path that had no guarantees. As someone who had been out of school for years, she knew that she would likely be, as she put it, “overlooked” by U.S. medical schools.

Dr. Christopherson confided her feelings to her now-husband, a multi-deployed Air Force pilot. He responded that if this was what she truly wanted to do, now was the time. Yet her dreams were met with opposition nearly everywhere else she turned. Dr. Christopherson’s advisor at the University of Arizona told her she would never succeed because of her longer-than-usual time to complete college, and suggested she pursue a different path.

She credits her husband as being the most important person in the pursuit of her dreams—from believing in her at the outset, to helping her through all the hurdles that she faced. “When I came home discouraged that day, my husband called the military support office on campus and connected me with an advisor who registered me for the required classes and supported my pursuits,” Dr. Christopherson said. “He truly has been my biggest source of encouragement and inspiration.” 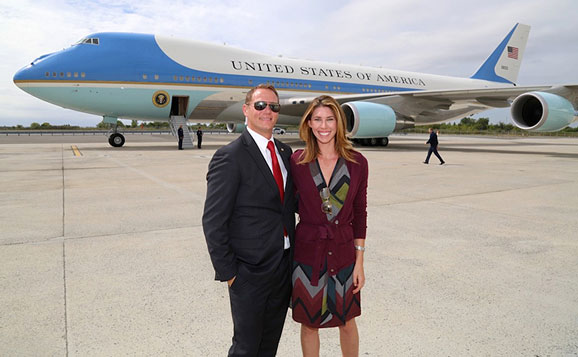 Dr. Christopherson and her husband Max in front of Air Force One at JFK Airport, when Max was working as a Presidential Advanced Agent as a Major in the US Air Force. Now he will be joining Dr. Christopherson in Houston, TX as a pilot for United Airlines.

Although she did apply to several U.S. medical schools, none responded favorably. That was when some friends in the military community—who had also gone to medical school later in life—advised her to check out AUC. She applied, got accepted, and prepared to move to St. Maarten.

“I was very nervous,” Dr. Christopherson admits. “I had put a lot of effort into this, and it was really scary thinking, well, what if it doesn’t work out? But even though I didn’t get accepted to a U.S. medical school, I believed in myself. I pushed my anxiety deep down and said to myself,  ‘This is my goal, and clearly others have succeeded by taking this route. So why can’t I?’”

From the day she arrived at AUC, Dr. Christopherson already knew she wanted to pursue gastroenterology. A few years back, her sister, at age 21, had to get a colonoscopy—an unusual procedure for a young person. To help soothe her sister’s anxiety, the hospital staff allowed Dr. Christopherson to be present.

For Dr. Christopherson, it was a life-changing experience. “It was so cool to see inside someone’s body without having to cut into it, so that got me intrigued to learn more about the field,” she recalled. “I’m also really interested in diet and fitness, and there’s a huge nutritional piece to gastroenterology. So it was pretty much the coolest job I could ever imagine doing.” 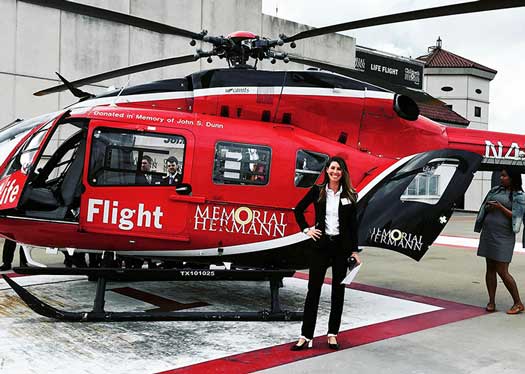 Dr. Christopherson on top of UT Houston Hospital, checking out the Life Flight helicopter pad, during her interview day. "Being invited to interview at my top choice made every day of nonstop studying worth it, and matching there is a dream come true," says Dr. Christopherson.

The rigor of medical school alone is enough to fill up anyone’s schedule, but in addition to keeping up with her own studies, Dr. Christopherson consistently devoted time to helping her fellow students and her community. While on campus, she tutored numerous courses, inspired other students to work out, mentored new students, volunteered regularly, and hosted a weekly local radio show. Once she started clinicals at Nassau University Medical Center, she took on new challenges such as research projects. No matter the endeavor, it’s never been enough for her to do only what’s required.

In addition to her husband, Dr. Christopherson cites her uncle as inspiration for her can-do attitude.

“I’ve always been the type of person who can go one extra step further,” said Dr. Christopherson. “I have an uncle who’s a quadriplegic. He’s the most inspirational person to me. He goes to work, has a family, he’s become very successful—all while not being able to use his limbs. I wake up every morning and think, I have all my abilities, so why would I ever waste one moment of my life? I have to do what I can do.”

Her advice for current AUC students hinges on that same theme: do your best, and go for the gold.

“Don’t ever get discouraged because you’re a Caribbean medical student,” Dr. Christopherson said. “Go for that position or that specialty that you want. Have a backup, but put your dream out there and see what happens. So many of us have succeeded beyond what we might have expected. You just need to try.”

Blog
From Engineer to Endocrinologist
How a hospital experience inspired Mike Lemay, MD '00 to change careers and discover his true calling as a physician specializing in endocrinology
Blog
Why This Award-Winning News Anchor Enrolled at AUC

By the time he reached his 30s, Bradley Reed was by all accounts on the right track. He was working as a primetime news anchor in his home state of Arkansas. He won two Emmy Awards. He was engaged to be married.

But something was missing.

Blog
From All-Star Babysitter to Socially Conscious Pediatrician
Looking back, it’s hardly a surprise that Rebecca Filbrandt, MD ’17 found her calling in pediatrics.