The mass was slightly larger than a golf ball. Buried in a collection of lymph nodes deep in his abdomen, it had shown up on the CT scan just before Christmas.

Doctors confirmed what Chris Haltigin already knew, thanks to his medical training: The hard-to-reach location of the mass eliminated surgery as an option.

Haltigin would need to start a nine-week course of chemotherapy as soon as possible. The earliest opportunity was January 2, 2017.

He thought about it. There was a conflict. He had a residency interview in Detroit scheduled for January 4, and a second interview for another hospital, Beaumont-Royal Oak Hospital, the next day. Haltigin had never let his illness take precedence over his life, and he wasn’t about to start now. He flew to Detroit, did both interviews, and started chemo on January 9.

Chris Haltigin at his last chemotherapy session on March 7, 2017.

As Haltigin says, he doesn’t necessarily fit the standard profile of an OB/GYN physician: Hailing from Oakville, Ontario, he’s a former professional hockey player and originally wanted to be an orthopedic surgeon. But his journey through medical school was even more atypical. It was in April 2015, just after Haltigin had completed AUC’s medical sciences program, that he was first diagnosed with testicular cancer. Days later, he was in surgery.

Yet Haltigin didn’t let his diagnosis keep him from completing the USMLE® Step 1 Exam. He continued to have regular checkups, but it appeared that the surgery had been successful. So he headed to the United Kingdom to complete his clinical rotations, where he discovered his love for OB/GYN.

“[OB/GYN] is such an emotional roller coaster. You go from 0-100 mph instantly,” Haltigin says. “Being part of the birth of a child is monumental.”

And his hockey experience proved valuable in unexpected ways.

“I remember this one on-call shift when I was helping a woman deliver twins, and she was screaming and swearing at us at the top of her lungs,” Haltigin says. “Afterwards she was embarrassed and kept telling us she was sorry, and we just laughed and said it was fine, seriously, look at what you just went through. Plus, as a hockey player you get kind of used to having people swear at you.”

A year and a half later, the relapse came as a shock. Haltigin had felt fine, with no indication that he was sick besides what had appeared on the CT scan. Yet now, during an already-stressful period of interviewing for residency positions and finishing up his rotations, his life had once again been thrown into a tailspin. 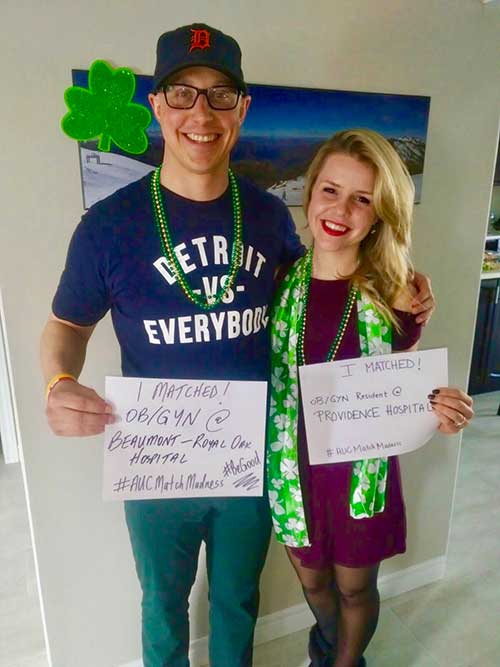 Haltigin with classmate Sophia Halassy after finding out where they matched on March 17, 2017 -- only 10 days after Haltigin finished his last chemo session.

The hours in the day seemed to shrink, as so many things had to happen at once. Stay focused on interviews. Talk with family. Notify AUC. Figure out how to graduate on time. Endure chemotherapy. Match into a residency.

“It was a situation that nobody foresees,” Haltigin says. “The residency process is tiring to begin with, and for me, making it through medical school while battling cancer twice is something I’m really proud of.”

Haltigin worked with dozens of AUC faculty and staff to ensure that he could graduate and be eligible for the 2017 Match, while completing his chemotherapy regimen and tending to his health. He will finish his last rotation on May 26—the day before graduation. On May 27, Haltigin will speak at the AUC graduation ceremony, as one of two student speakers chosen by his fellow classmates.

“I’m so grateful to everyone at AUC who helped me make it work—Dean Chumley, Dr. Kirkland, Dr. Taylor, the advisors, the coordinators, the registrar, the Office of Student and Professional Development—all of these people were amazing,” Haltigin says. “I was always proud to be an AUC student, but now I’m even more proud.”

Haltigin and classmate Kendal Hanger at the AUC Match Celebration in Detroit.

Despite the whirlwind of the past few months, Haltigin has had a rare period of relative quiet—and he’s already getting antsy. “I’m definitely more of a go-getter, I don’t like being slowed down,” he says. “It’s been a good learning experience for me to actually pay attention to how I’m feeling. I’m learning that it’s okay to not feel well. It’s okay to slow down and take time to heal.”

As his residency in Detroit is less than a four-hour drive from his home in Ontario, Haltigin will be able to continue his follow-up appointments with relative ease. He doesn’t anticipate any conflict with his residency.

“The word ‘cancer’ scares everybody, but what a lot of people don’t realize is that every single cancer is different,” he says. “Testicular cancer is one of the most curable cancers out there, and my chemo regimen has more than a 90-95% success rate. If I had to get cancer, I’m lucky that this is the type I got.”

Always one to find the silver linings, Haltigin says he gained perspective that will allow him to become a more empathetic physician. “I now understand how hard it is to be a patient—the grind you have to go through mentally and physically,” he says. “I really think that will help me be a better doctor in the future.”

The whole experience has been eye-opening, to say the least.

“You realize who’s in your support network when something like this happens,” Haltigin says. “Going through chemo, there were times that I felt so bad physically, but I had so many people looking out for me and encouraging me. Between my family, my friends, everyone at AUC, it’s like links in a chain. Without one of those people, I wouldn’t be where I am today.”

News
From Construction to Physician: AUC Alum Follows Blueprint to His Calling
Growing up in East Meadow, NY, Athanasios “Tommy” Tzaras, MD, ’18 spent his childhood and much of his young adulthood at his father’s side laboring on construction sites throughout New York City and Long Island.