Matching in Her #1 Choice

Dahlia Guerrero may have been far from her home in Plano, Texas when she started at American University of the Caribbean School of Medicine (AUC). But the arrival of homemade tamales her mother mailed each holiday season made her feel as though she’d never left.

These savory comforts of home kept coming after she moved to New York for her clinical rotations at Nassau University Medical Center (NUMC). And you can bet she’ll be enjoying them while completing her residency in radiology and preliminary medicine at NUMC—her first choice.

Ask Guerrero how it feels to match as a first-generation Latin American grad in one of the most competitive medical specialties, and her joy is still as fresh as when she first opened the email from the U.S. National Resident Matching Program®.

“AUC gave me the opportunity to go after my dreams,” Guerrero says. “I’m still in awe of how perfectly everything worked out.”

Yet Guerrero’s medical school journey was hardly without its challenges. A self-described non-traditional applicant, she’d entertained the idea of pursuing medicine during undergrad at Pepperdine University, but chose to major in international business. Then, the summer after graduation, her mother was diagnosed with leukemia.

“Medicine had always been an interest of mine, but it was my mom’s diagnosis that really fueled my aspiration to pursue it as a profession,” says Guerrero.

So she spent the following year and a half close to home, completing her prerequisites at the University of Texas-Dallas (UT-Dallas), while taking care of her mother. She learned about AUC from UT-Dallas advisors, applied, and was accepted for the fall 2012 semester start. But after speaking with AUC advisors, Guerrero opted to start earlier and join the May class—a smart move, she says.

“From the beginning, AUC helped me chart out what would be in my best interest to succeed,” says Guerrero. “They recommended I start in May because it would be a smaller class size, and the start date would give me more time to study for the [United States Medical Licensing Examination®] USMLE STEP 1 exam. That was really helpful for me.”

AUC’s location on the island of St. Maarten also suited Guerrero, who studied abroad in both high school and college. “I like to pair my education with adventures,” says Guerrero. “I love experiencing new cultures and new people.”

Finding a Home in her Hospital

Still, she was glad for the opportunity to put down roots at NUMC during her clinical years, where she found her calling during her first rotation—radiology.

“They call radiologists the ‘physician’s physician,’” says Guerrero. “While you might not get to meet patients all the time, you’re in direct contact with their doctors, giving them the information to make the diagnosis. And I love being able to give that knowledge.”

Guerrero stayed in contact with the attending physicians and residents at NUMC, which helped open the door for involvement in research projects there, as well as her residency match. She’s grateful to be returning to the family she’s built.

“They not only became my mentors and research partners, but also my friends,” Guerrero says. “And the hospital was more than just a place of learning—it’s my home.”

Another pleasant surprise for Guerrero about NUMC was the opportunity to treat a fairly large Latin American patient population.

“When I told Latin American patients that I was a med student, the sense of pride and happiness that came across their faces was so rewarding,” says Guerrero. “There aren’t that many Latin American physicians in America. I think it helps patients feel more comfortable when they can talk to someone who looks like them and speaks their language.”

Now, with her mom in remission, Guerrero is keeping busy in the weeks leading up to residency by giving back to her community. She’s involved with the nonprofit group North Texas Latin American Physicians Association (NTLAPA), helping with scholarships for aspiring Latino physicians.

“I want to help other minority students and encourage them to reach high and be proactive,” Guerrero says. “Reach out to programs you’re interested in—call them, email them—just get yourself off the paper. Don’t be afraid to step out into the community and volunteer. Believe in yourself and don’t let the hurdles stop you.”

Meet the Student Speakers for AUC’s 2021 Commencement Ceremony
It’s AUC Commencement tradition to have a student speaker elected by their peers speak on behalf of the class during the ceremony.
News 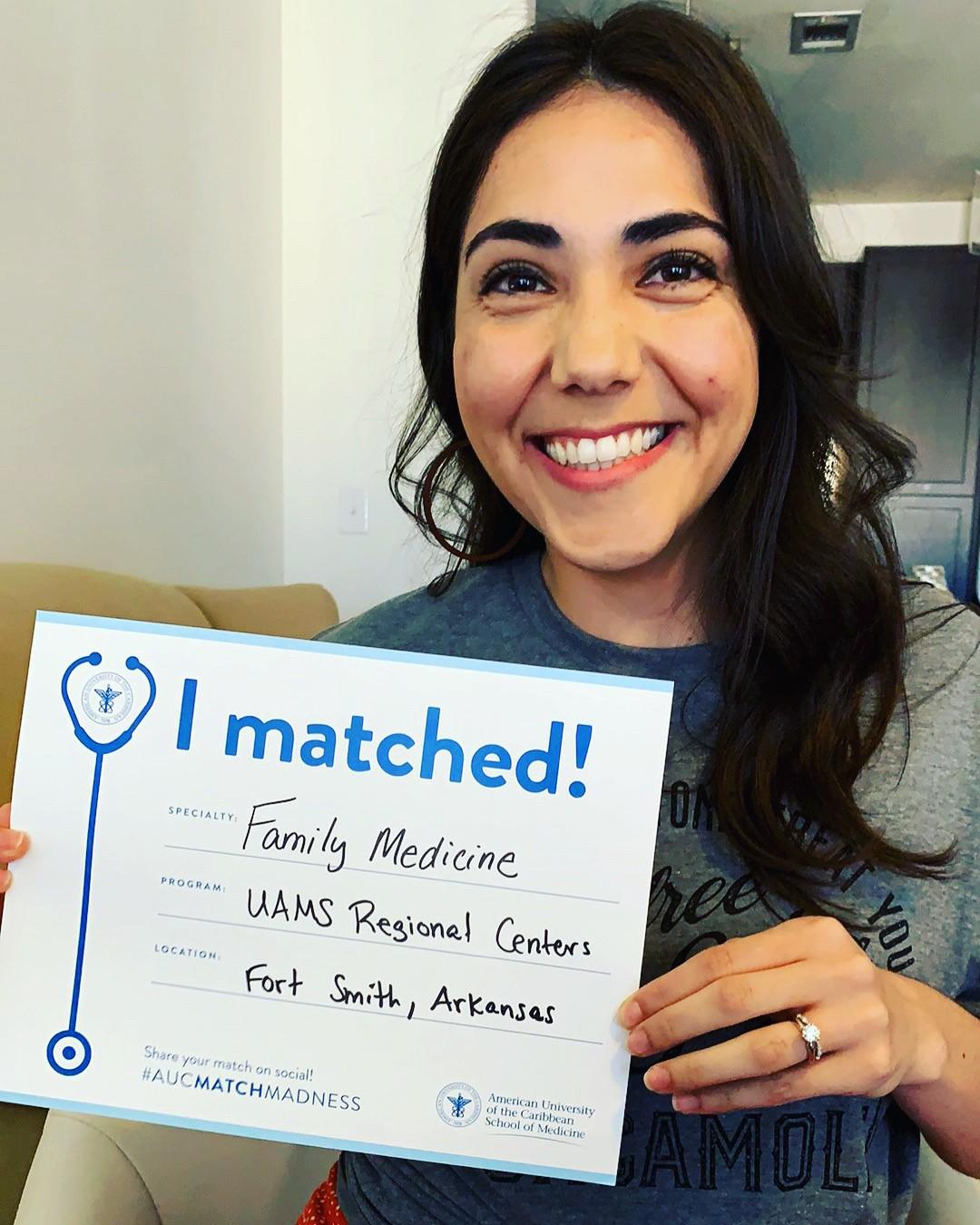 First-Gen High School Grad Yanet Camarena, MD ’21 Matches into First-Choice Residency
As the oldest of six children, Yanet Camarena learned the responsibility and privilege of caring for others early on in life. She remembers one defining moment when she was 10 years old and her youngest brother—age 7 at the time—was injured after being struck by a vehicle not far from their home in Watonga, OK.
News