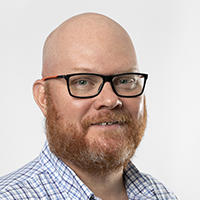 Dr. Rodda completed his BSc in Biology and Biotechnology at Carleton University in Ottawa, Ontario in 1993, graduating with High Honours.  He then went on to complete his PhD in Biochemistry at the University of Ottawa, graduating in 2000.  During his PhD Dr. Rodda carried out research on the mechanisms by which proteins normally involved in DNA-repair, also played a role in the regulation of transcription.

Following the completion of his PhD Dr. Rodda travelled to the United Kingdom to do post-doctoral research at University College London where he studied a repetitive DNA element that was found to control the expression of a large number of genes.  In 2004 Dr. Rodda moved to the Genome Institute of Singapore as a post-doctoral fellow, becoming a Research Associate in 2007.  In Singapore he carried out research on the transcriptional networks that determined the pluripotency of embryonic stem cells, and that governed the differentiation of cells within the preimplantation embryo.

To pursue his passion for teaching Dr. Rodda moved to the Caribbean in 2011 where he began a faculty appointment as an Assistant Professor of Biochemistry and Genetics at the Medical University of the America's in Nevis.  In 2014 he joined the American University of Integrative Sciences in St. Maarten as an Associate Professor.

In 2016 Dr. Rodda moved across the island to join the faculty at the American University of the Caribbean in St. Maarten as an Associate Professor of Molecular and Cell Biology (MCB).  At AUC Dr. Rodda is the course director of MCB1 and lectures in both the MCB1 and MCB2 courses.  He teaches primarily Medical Genetics, but also contributes to Molecular Biology and Biochemistry teaching.  Dr. Rodda values active learning teaching methods and has introduced Team-Based Learning into the MCB1 course and continues to develop new Team-Based Learning content.

Away from teaching Dr. Rodda probably spends too much time watching his favorite sports teams – the Ottawa Senators, Toronto Blue Jays, Arsenal and the Dallas Cowboys (among others). He's a passionate scuba diver and loves to travel around the world looking for new dive sites.  Despite an ignorance of all-things-nautical, he dreams of one day buying a sail boat and sailing off into the sunset.