After years of living abroad, Dr. Monis will bring her global perspective to residency at Riverside Community Hospital in Riverside, California.

Class of 2020 graduate Carol Monis is no stranger to new places. Before starting medical school, she had lived in five countries—India, Nigeria, England, Canada, and the United States—and has since added Sint Maarten and Vietnam to the list. But Dr. Monis couldn’t be happier to finally return to the place she calls home: California, where she earned her first-choice residency at Riverside Community Hospital’s internal medicine program. 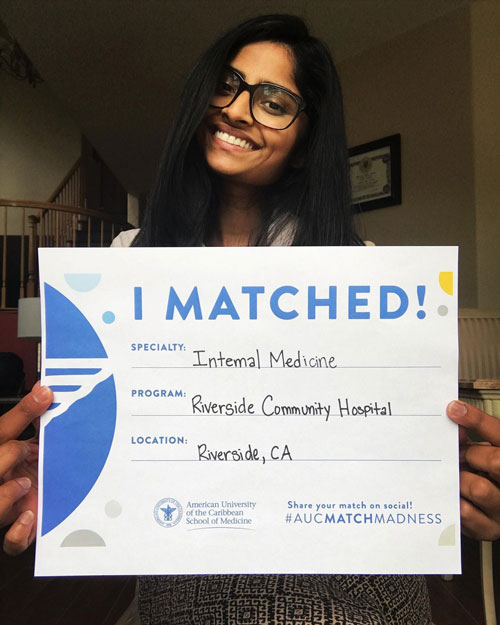 Her father’s job in the auto industry took Dr. Monis and her family around the world, moving every few years since her childhood. Today, she lives in Moorpark, California, about 100 miles northwest of Riverside. “I’m used to having to pick my life up and move around,” she says. “Many people see it as a challenge, but I see it as an adventure and a chance to meet new people.”

At AUC, Dr. Monis took advantage of opportunities to travel while broadening her perspective as a physician-in-training. She completed her core clinical rotations at Wexham Park Hospital in the United Kingdom and spent time in Vietnam for a global health elective offered through AUC’s clinical affiliation with Danbury Hospital.

“Being exposed to different areas of healthcare taught me a lot about being adaptable,” says Dr. Monis. “It also helped me learn about healthcare disparities that I might not have seen otherwise.”

When Dr. Monis started the residency application process, her original goal was to match into OB/GYN. But as she did more elective rotations and began interviewing for residency positions, Dr. Monis found herself more drawn to the internal medicine programs where she’d applied.

She tried to shrug it off at first, given the time she’d invested into preparing for a career in OB/GYN and strengthening her applications with those programs in mind. Still, Dr. Monis couldn’t ignore the fact that her heart wasn’t in it. Completing an internal medicine sub-internship and a rheumatology elective solidified her decision to switch gears and focus solely on internal medicine.

“Medical students are trained to do research and think logically. But this is an instance where I say it’s OK to listen to your gut,” says Dr. Monis. “I was afraid that people would think I was quitting when I decided to change specialties. And I wouldn’t recommend doing it so late in the game. But my family and colleagues supported me, and I made the choice to go towards what would make me happy.”

Dr. Monis chose to rank Riverside Community Hospital as her top choice not only because it was close to home, but also for the atmosphere that reminded her of AUC.

“You hear about medical school being overly competitive, but I had the complete opposite experience at AUC. All the students came together to help each other succeed,” says Dr. Monis. “I think that’s very important, especially in the field of medicine. You want your colleagues to champion each other and work as a team in the hospital. And when I interviewed at Riverside, I got that amazing sense of community that I felt throughout my time at AUC.”

Dr. Monis is passionate about physician and resident well-being. As a clinical student, she researched and presented on the topic at AUC’s annual UK Clinical Symposium, bringing attention to risk factors and resources to support doctors’ mental health.

“Being in a positive work environment makes a huge difference in training and how you can succeed,” Dr. Monis says. “At Riverside, I got the vibe that the residents were happy, encouraged, and well supported in their program.”

Advice for The Match™

For current students planning their strategy for the Match, Dr. Monis recommends devoting plenty of time to researching programs.

“At the end of the day, deciding where you want to go for residency is probably one of the hardest decisions you’ll have to make. You have a finite amount of time to figure out what your career is going to be and to prepare for it,” says Dr. Monis. “Think about what’s important to you in a program, and apply to as many programs as possible. The more research you do, the better chance you give yourself.”

And despite the anxiety that comes with interviews, she says, it’s important to be open and authentic.

“Be yourself,” says Dr. Monis. “A lot of residency programs are similar in the quality and scope of the training, but interviews allow you to get a better feel for the program and see how you would fit in. A lot of times, people find one that just clicks for them.”