If you’re a sports fan and a medical student, chances are the idea of being a team physician has crossed your mind. Here, two AUC graduates offer a glimpse into their experiences treating patients on an NFL roster. 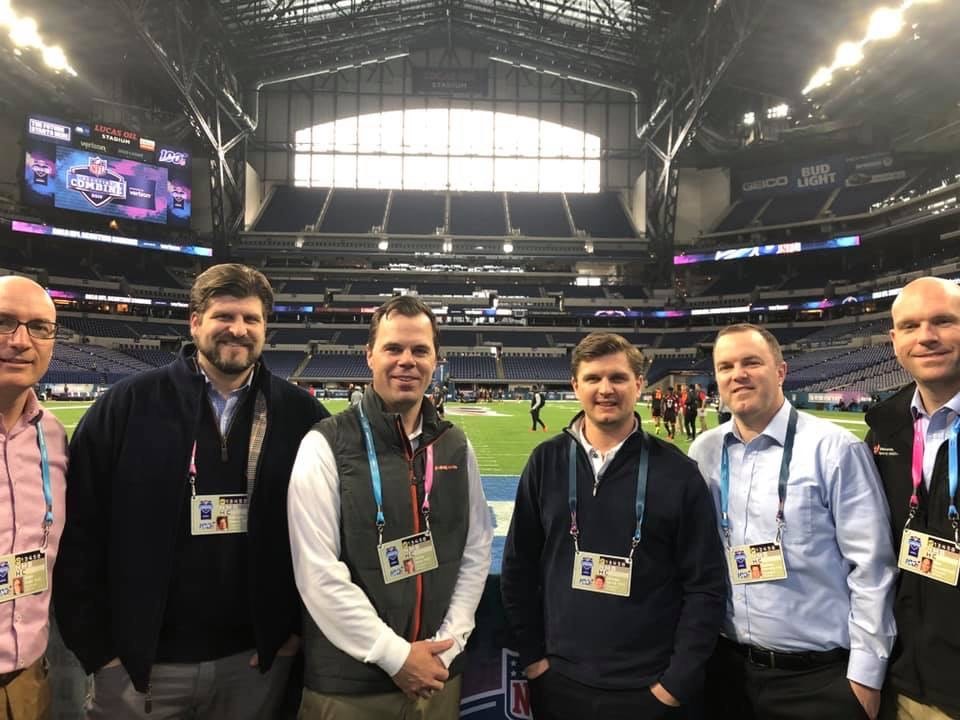 The National Football League (NFL) is known for having the shortest season in U.S. professional sports, with seven months between the Super Bowl and the start of regular games in September. But for Robert Flannery, MD ’06, a sports medicine physician assistant for the Cleveland Browns, offseason is scarcely more than a few weeks long.

What is a sports medicine physician? As Assistant Medical Physician, Dr. Flannery (pictured above, second from the right) is part of a small group of doctors who are charged with covering the players’ medical needs year-round as they train, play, and recover from the demands of the sport.

“Our season starts with organized team activities. We’re around practice if anyone has an illness or injury,” says Dr. Flannery. “There is maybe a month off in July where there is very little responsibility. Then, training camp begins and we get in our regular routine. We’re at practices, and the training room, and running our own practice at the same time, seeing patients outside of the team.”

Dr. Flannery, like many sports medicine  physicians, wears many hats. He’s part of the University Hospitals Sports Medicine Institute, where he also serves as Team Physician for Oberlin College and provides care for multiple area high school athletes. In addition, he was recently named the University Hospitals Sports Medicine Institute Director of Community Outreach and Education. For him, those Friday night lights rarely go dark.

“During football season, I’m on the high school sideline Friday night, college sideline Saturday, and professional sideline Sunday—or whenever there’s a game,” Dr. Flannery says. If it’s a Browns game, he’ll arrive at the stadium about three hours before kickoff and stay until an hour after the game.

Once the season is over, preparations begin for the NFL Scouting Combine, or, “where American football meets speed dating” as professional teams assess top college players ahead of the NFL Draft in April. Dr. Flannery’s job there is to evaluate players and their medical histories to help ensure that the athletes are healthy enough to participate. Then, the cycle begins again.

So, what is a day in the life of a sports medicine physician like? It’s a busy life. But Dr. Flannery wouldn’t have it any other way. “The best part is that I’m standing on a sideline, whether it’s football or basketball or wrestling, watching sports as part of my job,” he says.

THE MANY PATHWAYS TO BECOMING A SPORTS MEDICINE PHYSICIAN

While sports teams at the high school or college level may just have one or two dedicated sports medicine physicians, professional football teams have multiple specialists with specific areas of expertise. They can include orthopedic surgeons and primary care sports medicine physicians like Dr. Flannery. And just like the game itself, staying on top of players’ health often requires zone coverage.

“What’s interesting about the NFL is that it’s very separate,” says Dr. Flannery. “Any of the musculoskeletal injuries will go to the surgeons, and any medical issues, everything from pneumonia to sinusitis or dry eyes, go to the primary care sports medicine physicians. It’s much more like family medicine in that way.”

As you consider how to become a sports medicine physician, know that completing a family medicine residency is the first step in many sports medicine physicians’ careers after medical school. But it’s far from the only pathway. “If you want to do the primary care side, there are a number of ways you can go, such as pediatrics, physical medicine and rehabilitation (PM&R), emergency medicine, family medicine or internal medicine,” says Dr. Flannery.

Regardless of residency specialty, to be considered for all head team physician jobs for the NFL starting after 2011, you must be board certified in sports medicine and typically complete a one-year sports medicine fellowship.

For Joseph Weber-Lopez, MD ’10, it was during his fellowship with Atlantic Health System—the medical partner for the New York Jets—that he became immersed in NFL sports medicine.

“My fellowship director was the team internist for the Jets,” says Dr. Weber-Lopez, who now owns ProPeak Sports Medicine in New York. “A big part of my fellowship was working with the team, going to the practice facility, up to training camp in the summer, going to the NFL Combine, and evaluating players. It was an awesome experience.”

THE ROAD TO RECOVERY: WORKING WITH PLAYERS

One of the most eye-opening aspects of Dr. Weber-Lopez’s time with the Jets? “Seeing just how quickly you can get people back on the field at the professional level,” he says. With few financial or insurance restrictions, and abundant resources—and incentive—to get players healthy, time on the bench is slashed.

“In a common scenario for a non-professional—say, you fracture your fibula—you’d be on crutches and it might heal in about six weeks, depending on the injury. You’d take your time. Maybe in three months or so you’re back to playing,” says Dr. Weber-Lopez. “At the professional level, they do surgery that day and you could be on the field in just three or four weeks. It doesn’t really happen at the lower levels because it’s not usually medically necessary. But professionally, they want players back as quickly as possible.”

The expedited rehab is due in no small part to the players’ dedication, too. “It’s an intense process,” says Dr. Weber-Lopez. “You see them play on TV once a week, but what you don’t see is how hurt they get and how hard they have to work every day to get back in shape after an injury.”

Dr. Flannery agrees: Building relationships with players is one of the most rewarding parts of team physician jobs..

“It’s all about getting to know the guys underneath the helmets,” says Dr. Flannery. “They really have some great stories. Often the players have overcome personal strife, and they do a lot to give back to their communities. You root for them, you want to see them do well. You feel like you’re a part of the team.”

REDUCING THE RISK OF CONCUSSION

As much as  a sports medicine physician is involved in treating injuries after they occur, they’re also focused on prevention and player safety. Concussion has been at the forefront of the NFL doctor safety conversation, particularly after the number of concussions during preseason and regular season hit a six-year high of 281 in 2017. Accordingly, the past few years have seen updates to concussion protocol and improved helmet design, as well as rule changes aimed at reducing the risk of concussion. One example is the helmet rule introduced in 2018, which states that players cannot lower their heads to initiate and make contact with their helmets against an opponent.

Concussion figures in the NFL have since dropped from 2017, with 214 concussions diagnosed in 2018 and 224 2019. Although it’s difficult to determine exactly which factors contribute to a decline or uptick, Dr. Weber-Lopez and Dr. Flannery say the NFL’s safety measures are part of a larger shift in awareness about concussion.

“From a personal standpoint, I played football and had a few concussions in high school. It was different back then,” says Dr. Weber-Lopez. “Not that we were rushed back into the game, but they also didn’t really know as much as they do now. Now we’re finding out it does take a few weeks for the brain to get back to baseline after concussion. And we still don’t fully understand the long-term ramifications.”

The increased emphasis on player safety has led to a change in attitude throughout the sport, Dr. Flannery says.

“We’re starting to see more athletes come over and tell us what’s going on with them, or we’ll hear from their teammates or coaches about a possible injury, which you might not have seen five to seven years ago,” he says. “The NFL has done a great job with focusing on player safety, player education, and equipment safety. You’re starting to see that trickle down to college, high school, all the way to pee-wee football.”

1) Volunteer at multiple types of sporting events. “Help out with a marathon, cover a high school game, shadow a local sports medicine physician.. Try to get as much exposure as you can,” says Dr. Flannery, who sits on the applicant review committee of a sports medicine fellowship program. “We want to see that dedication to sports medicine early on—that willingness to give up a bit of free time to cover a race or a football or a soccer game—but also an interest in a variety of sports, not just one.”

2) Get comfortable with anatomy. “As you’re going through medical school, you really have to have a good understanding of anatomy. It’s all about understanding the relationship with muscles and tendons,” Dr. Flannery says. “And we certainly want to see good board scores, and that you do well on rotations.”

3) Be willing to travel. “The travel requirements of a NFL player doctor can be difficult with the amount of time away from your family,” Dr. Flannery says. “I’m very lucky that my wife is understanding and happens to be a sports fan as well. She enjoys coming to high school games and college games with me. And there are lots of benefits to travel as well. You get to go places and meet some people that you might not otherwise get to.”

4) Research the different sports medicine fellowships available. Dr. Flannery credits his fellowship at Rutgers University with providing him diverse experiences that helped him develop in his NFL doctor career.

“Rutgers was an unopposed program, meaning there was no separate orthopedic sports medicine fellowship. I was the only fellow there, so I got access to a lot more experiences than I would have had if I was competing with another fellow for exposure,” he says. “The other great thing about the Rutgers program was that we covered two Division I colleges, Rutgers and Princeton. I got to see a wide range of athletes, abilities, and sports. Princeton had sports like squash and water polo that aren’t necessarily on every campus.”

Other programs, like the fellowship that Dr. Weber-Lopez completed with Atlantic Health System, provided team physician jobs to work directly with professional athletes, which can offer a foot in the door.

“For the most part, teams are affiliated with a university program or a large private group that cares for them. Even at the high school level in my area, it’s very organized, and the big hospital systems are already affiliated with schools,” says Dr. Weber-Lopez. “If you start right off the bat doing a fellowship where you have direct access to a team you’re interested in, you’ll have a better chance to work with them in that arena.”

5) Consider joining a professional organization. Both Dr. Weber-Lopez and Dr. Flannery are members of the American Medical Society for Sports Medicine.

“Sports medicine is a small world. Everybody stays in contact,” Dr. Weber-Lopez says. “Our meetings are well-attended. I try to go every year or every couple of years. You can always go on the AMSSM website and look up physicians in your area to try and find shadowing opportunities.”

At the end of the day, there’s nothing quite like getting insight from someone who’s been there. “Use your networks,” Dr. Flannery says. “I think with sports medicine, everyone’s pretty willing to talk to someone who’s interested in it. Most people involved in sports medicine really love the field and are happy to talk about it.”

Disclaimer: AUC School of Medicine is not affiliated with the NFL or their respective teams