Director of the Global Health Program at Western Connecticut Health Network and Trefz Family Endowed Chair in Global Health, Dr. Majid Sadigh shares what he sees as the meaning of global health.

Thirty years into his career, Dr. Majid Sadigh has had a lot of time to think about the words global health: What do they mean, what do they symbolize, and what impact can they have? It’s fitting that when asked for his definition of global health, he chuckles, takes a pause, and slowly edges into a story.

Before Dr. Sadigh was a leading expert in global health, he was a young boy living in the south part of Iran. He came from humble beginnings in a small town with socio-economic and political hardships. There was poverty, discrimination and inequality; there was war.

One memory in particular haunts him. As a resident at Pahlavi University, he traveled to a small hospital in the town of Shiraz, where a nomadic tribe resided. One night, he was called to the emergency department to see a 14- or 15-year old girl who he was told had attempted suicide. Her neck was slashed and she was pregnant. He realized the tragedy of the situation; she had likely been raped and then cut by a family member who was ashamed of her pregnancy. That culture had expectations of virginity. Dr. Sadigh was deeply affected by the event and grappled with questions of tradition and injustice.

Years later, when medical education took him to Waterbury, Connecticut, Dr. Sadigh considered himself lucky. He flourished as an Internal Medicine resident and continued his training in Infectious Disease at the University of Chicago. As his successes stacked up, Dr. Sadigh felt a pull towards his past life in Iran and made a promise to give back to those in need.

Dr. Sadigh made good on his promise. He used vacation days to travel to resource-limited countries, and during his actual vacation, he made side visits to local hospitals as a volunteer. In 2005, when a 7.6 magnitude earthquake hit Pakistan, he took the long journey to provide medical relief and humanitarian aid. He has visited numerous other disaster sites, including tsunami-devastated Sri Lanka and post-genocide East Timor.

The volunteer work was important but Dr. Sadigh had bigger sights in mind. As a teacher, he wanted to incorporate education into his work. He also knew education was key to making a sizeable impact on global issues like access, equity, nutrition, and clean water. He needed the power and energy of medical students to make a difference.

“The majority of medical students come to medicine with empathy and a compassion for humanity,” he said. “They are young, kind and motivated, and I wanted them to not only learn about global health but to experience it. If I can show them, there is a better chance they will invest their time in this field.”

He began visiting universities and academic hospitals and taught the students and physicians various skills and techniques. During a trip to Russia, he met with leaders at Kazan State Medical University and pitched the idea of an exchange program with institutions in the United States. It stuck and so began the seeds of a global health program.

From Idea to Institution

From those seeds grew Western Connecticut Health Network’s (WCHN) Global Health Program—a project led by Dr. Sadigh and one that was proudly built from the ground up. The program has clinical exchange sites in five different countries, including Kazan State Medical University in Russia and Mulago Hospital in Uganda, where he once directed an exchange program for Yale University medical students.

The program has an ambitious and important goal: to expand medical students’ understanding of health through exposure to diverse healthcare environments and cultures. In doing so, it seeks to train global health advocates who can advance the quality of patient care in communities around the world.

“There are so many tragedies in the world and we need solutions,” he said. “I am looking for students who are problem solvers and who can help bring health equity to communities where access and education are limited.”

The program has several university partners, including the University of Vermont, Ross University School of Medicine, and AUC. AUC’s partnership began in 2016 and provides clinical students with the opportunity to complete a 6-week Global Health elective in the Dominican Republic, Russian, Uganda, Vietnam, and Zimbabwe.

The Meaning of Global Health

So what does global health mean to a man who has centered his life and career on that field?

“I believe global health is a bridge between two beautiful islands,” he said. “Each has its own beauty that compliments the beauty of the other. We are not just in one land to teach; we are there to observe, learn from that land, and take lessons back with us to the other island.”

In his comparison, Dr. Sadigh sees his medical students as one island and the exchange program as the other. He also believes that global health is a mission to close the gap on health inequality and to give a collective voice to those who are unheard. 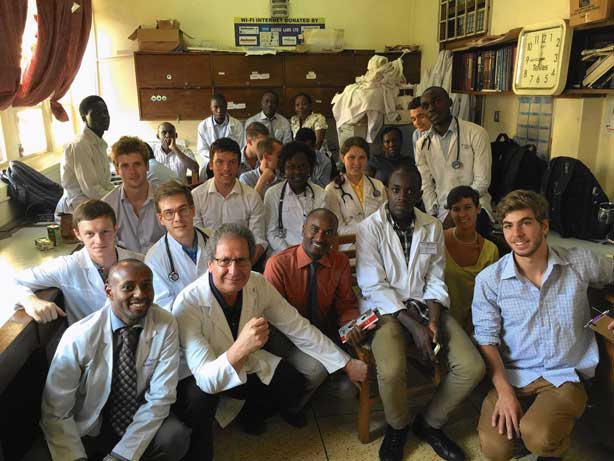 Pictured: Dr. Sadigh with medical students at an exchange program in Uganda. Sourced from the Hartford Courant.