When Hurricane Katrina struck the Gulf Coast in 2005, Jorge Granados was deployed to help restore the area as part of the military’s emergency relief team. Twelve years later, he found himself in the path of another hurricane.

This time, he was on St. Maarten, preparing to start his first semester at AUC.

A Sergeant First Class for the Nevada National Guard, Jorge had bid farewell to a 16-year military career to pursue his dream of becoming a doctor. He’d been a military instructor for nearly 11 years, specializing in implementing communications technology in a combat environment.

It was that training that kicked him into action when Irma hit. 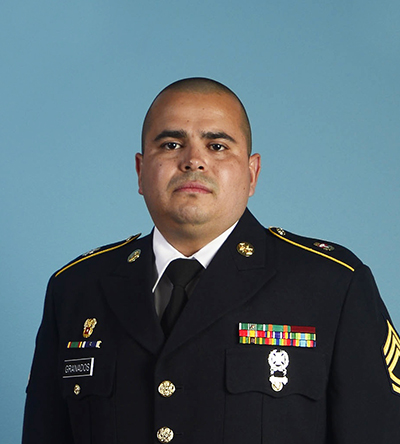 First on his to-do list: clearing the roads. Jorge had sheltered in his Beacon Hill apartment during the storm, where he stayed for two days due to flooded roads outside his building. But once the water receded, it left mountains of felled palm trees, torn fences and other debris in its wake.

“When Katrina hit, the biggest issue was blocked roads because rescue teams couldn’t get through,” Jorge said. “So when I walked out of my apartment, I asked everyone I saw on the street to help me move stuff off the road, and we all worked together to clear it.”

Days earlier, Jorge had met many of his neighbors by knocking on doors, checking to see if anyone needed help securing their homes before the hurricane. Although it was hard not to feel powerless against the imminent storm, Jorge focused on doing what he could for his community.

“It’s like that story about the little kid walking on the beach with his grandma, and he’s picking up the crabs and throwing them into the water to save them. His grandma tells him, ‘You’re never going to make a difference, there’s too many of them.’ And the little kid picks one up and says, ‘Well, it made a difference to that one.’ That’s how I felt with the hurricane,” Jorge said. “I couldn’t help everyone on the island, but at least I could help my neighborhood.”

He kept that in mind after the storm, as he and his neighbors banded together to clear the rubble from the street. Once the road was accessible, Jorge headed to AUC’s campus so that he could let everyone know that he was safe and continue to help out however possible.

"Any Soldier Would Have Done the Same"

Jorge began by helping administration keep track of crucial supplies, creating a dashboard similar to one he’d used in the military. It was a PowerPoint with color codes to indicate the levels of critical resources: food, water, fuel, security, power, and more.

“It’s supposed to be very simple, so that you can quickly glance at it and know immediately what’s right, what’s wrong, and how you need to improve,” Jorge said.

Evaluating the dashboard, Jorge noticed that Wi-Fi was available, but not internet. He realized that they weren’t taking advantage of a valuable resource, and decided to implement a small web server in the “command center”—the space where AUC staff gathered to strategize throughout the hurricane.

Throughout the experience, Jorge kept himself focused by imagining that he was back in a field training exercise with his “battle buddy,” his closest friend in the military. His buddy was a stickler for detail, and always reminded Jorge to not let the little things slip by him.

“I could hear him in my head, telling me ‘Make sure you’re keeping track of this, don’t forget about that.’ It’s like I had a drill sergeant in my head,” Jorge said, laughing. “As soon as I got cell service, I called him and said thank you.”

He emphasized that he simply did what he was trained to do.

“Any soldier would have done the same,” said Jorge. “It just happened to be me.”