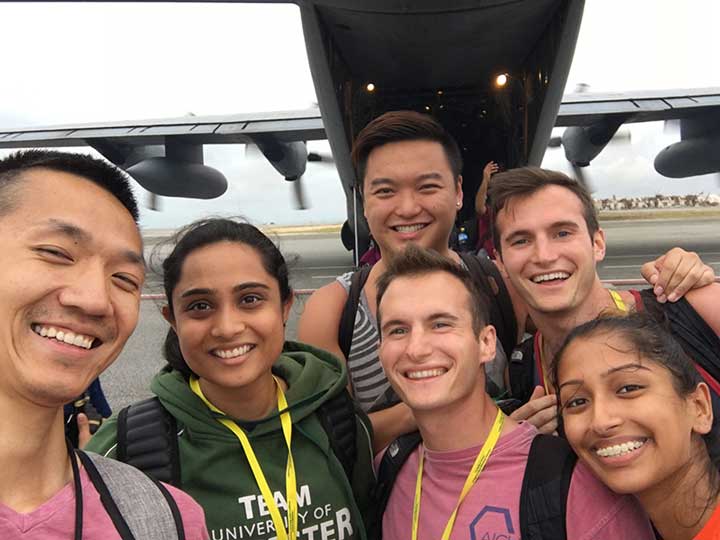 Juhi Patel (second from left) gathers with classmates prior to evacuation.

Hailing from the Chicago suburbs, second-semester student Juhi Patel came to AUC well-versed in how to handle a blizzard or a tornado. But she’d never experienced a hurricane before.

While she initially planned to weather out the storm at a friend’s apartment, the worsening forecast led her to Building 2 on campus Tuesday afternoon. Students were directed to the auditorium or office rooms to shelter on the first floor, the second floor was transformed into a makeshift hospital, and the third-floor anatomy lab housed students’ luggage.

“It felt like a giant sleepover at first—hundreds of people in their pajamas and sleeping bags everywhere,” she said. “I couldn’t really process what was happening.”

Despite the disorienting situation, Juhi didn’t waste any time looking for ways to help her community.

“An Adrenaline Rush That Proved Useful”

The first night, Juhi and another student tasked themselves with securing nearby doors and windows against the wind. With coils of rope in her hands, a long-dormant memory surged to the front of Juhi’s mind: a Girl Scout activity during grade school where she had learned to tie different types of knots.

“I honestly don’t know how it happened, but all the stuff I learned in Girl Scouts came right back to me,” said Juhi. “I didn’t know I could do it until I was standing there in front of the door, tying up the doors with these slipknots. It was an adrenaline rush that proved useful.”

When a couple of rooms on the perimeter of the building began to collect water around the edges, Juhi joined a team of students who vacuumed up water, dumped it into trash cans, and used buckets and cups to take the water to the restrooms. There, they were able to provide buckets of water to flush toilets, without having to use valuable energy or water stores.

In addition to maintaining the flow of supplies, Juhi helped prepare her fellow classmates and community for evacuation and made sure they were all accounted for through a check-in system. She was in charge of collecting birthdates, passport numbers, and guest information from those in the auditorium, in order to determine the headcount to be evacuated.

“I had to make lots of announcements asking students to check in, and public speaking isn’t my favorite,” Juhi admitted. “But it’s what the situation called for. Having one localized place to give these announcements kept everyone on the same page and made it a lot easier to organize. Dean Quirk [Senior Associate Dean for Medical Education], Hazarie [Ramoutar, Campus Administrator] and Tiffany [Ciolek, VP Enrollment] all updated us whenever they could, which was really helpful.”

The silver lining of the storm, Juhi said, is the experience she gained as a physician-in-training.

“It definitely solidified the fact that I’m in the right field,” Juhi said. “If, later on down the line, a residency program director asks why I want to go into emergency medicine, I have real-life experience to back it up.”