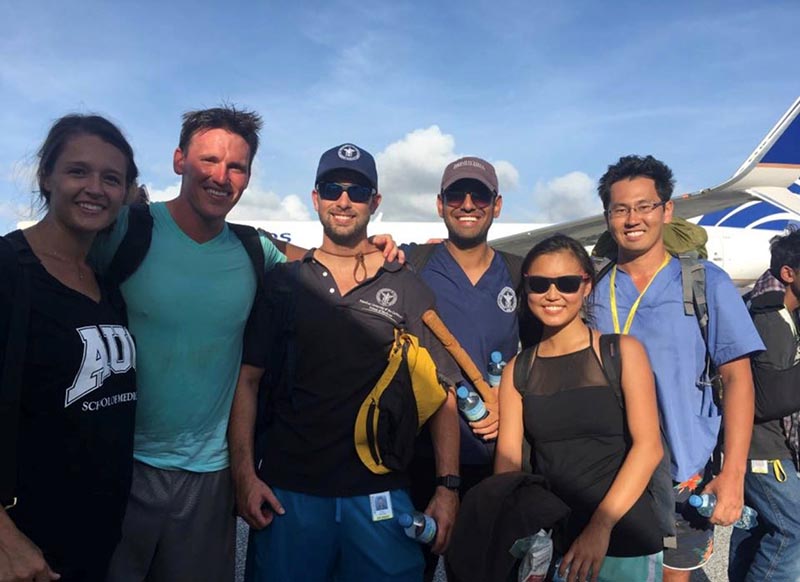 From left to right: Ashleigh Perkins, Kameron Perkins, Rory Eschete, Omar Syed, Emily Hollifield and Beke Chuluun were among the last to leave Sint Maarten after helping others evacuate.

In the days leading up to the fall semester start at AUC, word of a storm brewing began to bubble throughout St. Maarten. Like so many others, second-semester student Kameron Perkins initially didn’t think it was cause for alarm. Having lived on the island for a few months, he’d heard similar rumors of storms which had inevitably fizzled out.

“Usually, it blows off,” Kameron said. “This time it didn’t.”

He and his wife Ashleigh hunkered down in their apartment at Jordan Village. As the winds steadily worsened, the building shook back and forth, and objects ricocheted off the outside. “It sounded like a jet engine was inside my apartment,” he said.

During the eye of the storm, the winds died down and Kameron looked outside to find a barely recognizable scene. Two local student hangouts adjacent to his apartment—Fat Tony’s and BB’s—had been ruined. Cars were upside down. He could see a wall of storm on either side of him—the front end moving away, and the back end coming closer.

Somehow, Kameron managed to fall into a restless sleep, until he heard knocking on the door. It was his friend Rory Eschete, a fellow second-semester student who had come as part of an AUC team checking on people who had sheltered off campus. Kameron and Ashleigh went to AUC to check in and confirm their safety, before returning to their apartment to gather up their belongings.

The next day, their landlord asked if any residents would be willing to offer their apartments to people whose homes had been destroyed. Kameron and Ashleigh volunteered, leaving their apartment as a shelter for two elderly women, along with half of their provisions that they’d stocked up before the storm hit. They brought the rest to AUC, where they would stay for the next four days.

That first day, Kameron looked around to see what needed to be done. The first thing he noticed was that the garbage cans were starting to overfill, so he grabbed trash bags and started changing them out. Then, he helped move donated food up to the cafeteria, where he joined a group of students and staff in sorting it to get an accurate count of food stores. He spent the rest of the day moving and sorting food, slept for an hour, and then picked up where he’d left off.

During a town hall that morning, there was another call for volunteers. A pharmacist had come to AUC to ask if the school would help him secure his stock of medications. In return, he offered to give them provisions like Lidocaine to supply the makeshift hospital on the second floor of Building 2.

Kameron volunteered along with three of his friends—Rory, Omar Syed and Niko Martinez—to join an AUC staff member on the trip down to the pharmacy. They drove a flatbed truck to the store and set up boards to create a safe walkway into the building over the flooded areas and debris. The group packed up three truckloads’ worth of pharmaceutical drugs, brought them back to the school for safekeeping, and delivered the supplies that the pharmacist had set aside for the hospital.

“Venturing outside of campus, you could see how fortunate we were at AUC,” Perkins said. “We had power, running water, food, and then you look outside and there’s people walking around who had nothing.”

Back on campus, Kameron tasked himself with bolstering security around the perimeter of the school. He assembled a team of 20 volunteers to patrol the property every night after the evening curfew.

“Some people were upset by the curfew, but it gave a lot of people peace,” Kameron said. “At this point you have to realize there are essentially no rules. Outside of our little community that has supplies, people have lost everything and are trying to take whatever they can get. We were very fortunate to be in the place that we were.”

In addition to running a security team at night, Kameron was helping to arrange transport for evacuations during the day. He set up a caravan, consisting of 15 cars that had been left on campus, to ferry hundreds of students to the airport for evacuation. At the end of the day, it was maintenance time—refueling, changing flat tires, and performing other fixes needed after driving over debris left in the roads.

“I want to thank everyone who was part of the security team and drove cars in the caravan,” Kameron said. “Every morning and night they were out there, manning their stations and doing their jobs without anyone telling them to, and no one was getting any sleep.”

Many students had the opportunity to be evacuated sooner, Kameron said, but chose to stay and help.

“Most of the people I worked with could’ve gotten on a plane earlier, but instead they stayed behind and helped other students,” he said. “I’m so grateful for them. And even if you weren’t part of security or driving or in the clinic, it was the people who did the little things that made all the difference. People who stepped up to wash dishes in the kitchen, or brought water out to others, or picked up trash on the ground—they were doing their part and it made all the difference in the world.”

Kameron says he’s grateful for the bonds he’s made from this experience.

“Some of the students I worked with were just acquaintances before. Now they’re people I’m stopping in the halls to say hello, or grabbing a pint in Preston with. We’ve already started talking about getting together every year,” he said. “And Rory and I were already good friends—now we’re at best-man-in-your-wedding status. I definitely made bonds for life.”