This Class of 2014 grad decided she wanted to become a pediatrician when she took part in a medical mission to Honduras.

Story adapted from the Winter '18 edition of Healthscene with permission from Illinois Valley Community Hospital.

Anju Patel, MD '14 was in college when she took the four-week trip to Central America. She joined several physicians, students and volunteers riding a bus from village to village.

“Every day we’d drive our bus up into the mountains,” she says. “Each day we’d arrive at a different village and open up a one-day clinic there. Anyone who wanted to be seen would come and be treated.”

She remembers days that stretched from 7 a.m. to 8 p.m. And still “there would be lines of people waiting to be seen.” The people who lived in the mountains didn’t have any other access to health care.

Dr. Patel treated village children with parasite infections and illnesses that probably wouldn’t be seen in American children. “That solidified my mind to pick a career in pediatrics,” she says.

From India to Illinois 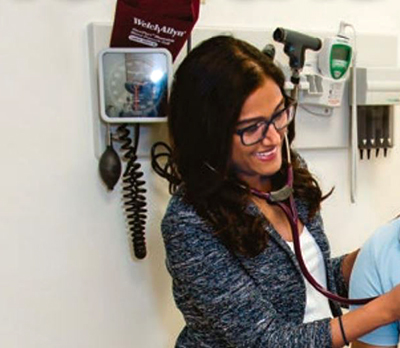 Dr. Patel was born in India. She came with her parents to Belleville, Illinois, when she was 9 years old.

She first began working with children when she was in high school and volunteered to be a Big Sister. She enjoyed working with kids enough to start volunteering at St. Louis Children’s Hospital.

“In college I became interested in the sciences,” she says.

She took classes in biology and chemistry at the University of Illinois in Urbana–Champaign. At first she found human anatomy “mind-boggling,” and a career in medicine may have been in doubt. But then came that trip to Honduras.

After earning her medical degree at AUC in 2014, Dr. Patel completed her residency at Bronson Children’s Hospital in Kalamazoo, Michigan. Now she works three days a week at Peru Primary Care in Illinois, affiliated with the Illinois Valley Community Hospital.

For Dr. Patel, pediatrics comes with both challenges and rewards.

“I think the most challenging part is when you’re treating very young kids, the ones who cannot explain their symptoms,” she says. “As a pediatrician, you have to be a good detective—as well as rely on your clinical skills and judgment. You might be seeing a 2-year-old who is complaining of a very big stomach pain. But you have to figure out, is this just a stomach bug or is it something more serious? That’s very challenging.”

The most rewarding part?

“The personal satisfaction that comes with treating kids,” Dr. Patel says. “You get to follow children from newborn to age 18. You play a major role in helping them to live a long life.”

And her patients appreciate her for it.

“She cares,” says Luke, age 13. “She’s really understanding and listens to me.”

Luke’s mom, Angie, agrees. “My family has been coming to Dr. Fernandez for years,” she says, referring to another physician at the practice. “It’s nice having another doctor here who also cares and is easy to talk to about my children.”

A Focus on Prevention

Preventing obesity with healthy eating habits is one issue Dr. Patel focuses on with her patients and their families.

“Healthy habits start early on, and they get carried into adulthood,” she says. “So you want to make sure you’re encouraging healthy eating habits at a young age.”

A second, somewhat similar issue is screen time—the amount of time a child spends in front of the TV, on the smartphone or on a computer. Parents don’t often bring this issue up during visits, but Dr. Patel believes it’s important to talk about.

“These machines are big parts of our lives,” she says. “We want to make sure kids get outside for play and exercise—for both physical and social development. It’s too easy for kids to just sit and watch TV or text or play video games.”

Dr. Patel is happy to have joined a practice in the Midwest. She did her rotations in New York, but the big city didn’t appeal to her much.

“It’s chaotic. It’s hectic,” she says. “At the end of the day you don’t feel relaxed, even when you’re at home.”

She does feel relaxed in Peru. She’s married—her husband, Jaimin, is a contractor and public adjuster. They’re expecting their first child in January. And they only live about three hours from her family in Belleville.