EDGE, which stands for Empowerment, Diversity, Growth and Excellence, is a colleague-driven initiative focused on promoting women’s advancement into leadership roles in both the workplace and the broader community.

American University of the Caribbean School of Medicine (AUC) on Friday launched EDGE, a program designed to accelerate the advancement of women employed by the St. Maarten-based medical school and its parent organization, Adtalem Global Education. The launch was announced during a special event featuring several prominent female leaders, including the Honorable Leona Marlin-Romeo, Prime Minister of St. Maarten.

EDGE, which stands for Empowerment, Diversity, Growth and Excellence, is a colleague-driven initiative focused on promoting women’s advancement into leadership roles in both the workplace and the broader community. Through EDGE, AUC seeks to empower an internationally diverse group of women who mentor and participate in professional development programs.

Core to EDGE is the opportunity for colleagues to network, share and learn best practices, and participate in skill-building activities. Friday’s event was the first in a series of guest talks that will address topics and issues facing women in the workplace.

AUC invited Prime Minister Marlin-Romeo to join three AUC and Adtalem leaders for a panel discussion on their paths to leadership. Self-discovery for the Prime Minister started at a young age during boarding school in the United States. While encountering new cultures, rules and prejudices, she forged a journey of self-awareness and empowerment that ultimately led to a career in politics and community relations. Now, as Prime Minister, Marlin-Romero seeks to inspire and teach others.

“I enjoy empowering people and I will never bring down another woman,” she said. “I truly believe that whatever you give to a woman, she will make something out of it. I try to teach that and remind women that we must teach and lift up each other. The sky is not the limit; you can go beyond.”

Female empowerment is valued at AUC and its parent company Adtalem, which are both led by women. Dr. Heidi Chumley recently celebrated five years as Executive Dean at AUC and Adtalem President and Chief Executive Officer Lisa Wardell is the only African-American female CEO at a Fortune 1000 company in the United States.

In St. Maarten, AUC currently employs 138 colleagues—72 of whom are female. The majority of colleagues were in attendance for Friday’s event and will help develop future EDGE events on and outside of the university’s campus. 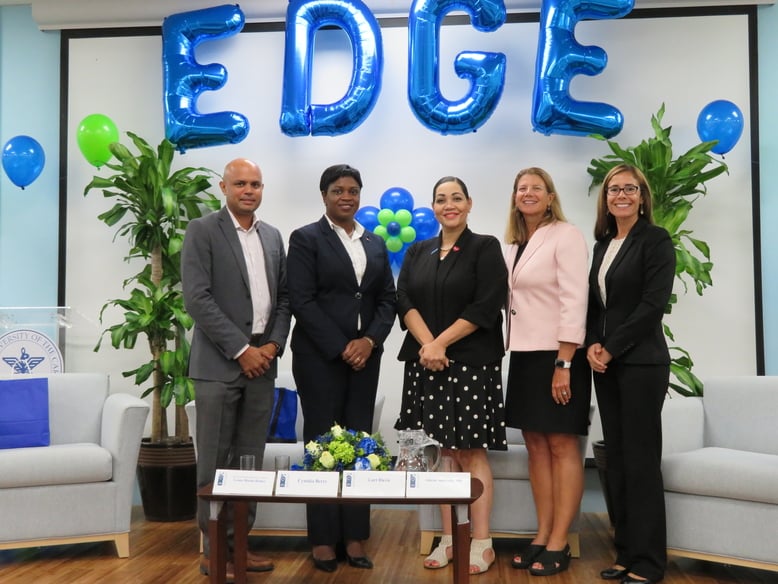