This month marked the 10-year anniversary of Community Action Day, a student-led showcase of community outreach in Sint Maarten 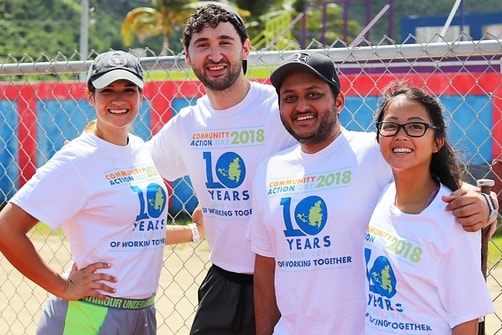 On Saturday, October 20, nearly 300 AUC students, faculty, staff and friends dropped everything to volunteer at service projects throughout Sint Maarten. It was part of a 10-year tradition at AUC known as Community Action Day when once a semester, three times a year, the AUC campus partners with schools, non-government organizations, public lands, and civic groups to volunteer. The details of what they do differ from site to site but the purpose is the same: to help and learn from local organizations that provide a service to the people and communities of St. Maarten.

Saturday’s event was one for the record books. Not only did it draw the largest crowd in AUC’s history but it also marked the 10th anniversary of Community Action Day. To commemorate that special milestone, Dr. Golden Jackson, Assistant Dean for Service-Learning and Community Affairs, organized several events leading up to Community Action Day that brought students and community partners together around a shared legacy of service.

“One of my firmly held beliefs is that a medical school should be of value to the community in which it serves,“ said Heidi Chumley, MD, AUC Executive Dean, at a Community Partner Celebration last Thursday. “Similarly, the community provides a great value to us. Community Action Day gives our students—who are tomorrow’s physicians—the joy of service and we are proud to celebrate partnerships with over 30 different community organizations.”

AUC was also thrilled to host AUC graduates Drs. Emmanuel Ofori ‘12 and Beatrice Kenol ’12 back to campus for the service anniversary. Drs. Ofori and Kenol dreamed up the idea for Community Action Day during the fall of 2008, and led the first event with just a handful of students and volunteer sites. Their plan was simple and actionable: create one day of impact when AUC students with busy schedules could help create positive change in the community.

For their hard work and ingenuity, Drs. Ofori and Kenol were presented with the Dean’s Transformational Award. The award recognizes an individual or group whose vision and ability to implement an idea has resulted in a transformational change in the educational content and approach at AUC. This was just the second time the award has been bestowed on a student or graduate of AUC.

“As medical students, it’s natural for us to want to help people and to be connected with the community,” said Dr. Ofori. “I want everyone at AUC today to be encouraged by this event and milestone. Know that you can make a difference and an impact on the world.”

From a Pilot Event to the Largest Student-Driven Initiative

Since that first event in 2008, AUC has held 30 Community Action Days in Sint Maarten. The only semester ever missed was in September of 2017, when Hurricane Irma forced a temporary evacuation from the island. It continues to be a student-led event but now includes the support of Dr. Golden Jackson and the AUC Student Volunteer Committee.

In recent years, Community Action Day has regularly drawn more than 200 students, staff, and friends of the university. After setting a record in February of this year—just a month after AUC returned to Sint Maarten following Hurricane Irma—AUC set an even more impressive record on Saturday, when 297 people volunteered 877 hours of service.

The anniversary event sent student volunteers to 15 different sites around the island. Many were with familiar faces: Excited little leaguers from Player Development SXM who were ready to take on AUC students in a game of baseball; the children of ICAN and New Start foster homes who eagerly ate breakfast before playing with students; leaders of the St. Maarten Nature Foundation whose Mullet Bay Beach cleanup resulted in the removal of more than two hundred pounds of trash; friends at TriSports who lent out kayaks so that students could clean debris from the lagoon; our furry friends at SXM Paws who held a pet adoption event, and neighbors at Philipsburg Jubilee Library who offered space for students to present a lesson on human anatomy.

There were also new events and partners. Students assembled exhibits at museums; worked on science projects with students at Hillside Christian School; delivered a breast health talk with the Positive Foundation at the United Pentecostal Church; and held a barbeque for elderly residents at Sint Maarten’s Home.

For Jordan Coyner, a 4th semester student who is a member of the Pediatrics Interest Group, Community Action Day brings up a flurry of wonderful memories. Like the time she connected with a very shy little girl who had trouble opening up to people. After a morning of arts and crafts, the girl bonded with Jordan and even drew her a big heart with their names in the middle.

“I made a difference in her life that day and she made a lasting one on mine,” she said. “What I hope for the future of Community Action Day is that if we have 600 students enrolled on campus at AUC, all 600 will participate.”

Reflecting on the Legacy of Community Action Day

As Community Action Day grows, the principles of community service have become more deeply ingrained in the culture of AUC. It has become part of what makes AUC stand out among other medical schools and it attracts the kinds of applicants AUC wants—future physicians who will be socially accountable and engaged with their communities. 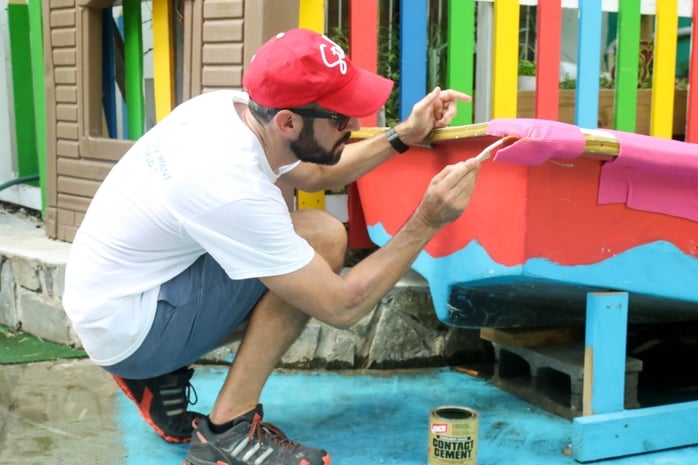 To see photos from the October 20 Community Action Day, visit our online album. We would like to thank all of our Student Experience Ambassadors for contributing this beautiful collection of images.

Blog
Should I Go To Med School?
Many students exploring different career paths often wonder at some point, “Should I go to med school?”. A career as a doctor can be incredibly rewarding, enabling you to make a difference in the lives of others while having a financially secure career, but this career path is not for everyone.
Blog
How to Become a Doctor
The path to becoming a doctor can be difficult, so why be a doctor? Check out this article to learn why physicians were inspired to start their own path to medical school. Read more!
Blog
Bilingual Blogger Urieliz Cintron Shares Tips on Healthy Lifestyles and Medical School
How do parents choose what their kids should eat? It’s a question that sparked curiosity in third-semester student Urieliz Cintron and led to the publication of her recent blog post in AUC Frontline, American University of the Caribbean School of Medicine (AUC)’s independent student-run news site.