A Parent Perspective on the AUC Experience

The mom and dad of an AUC student share their thoughts on AUC. 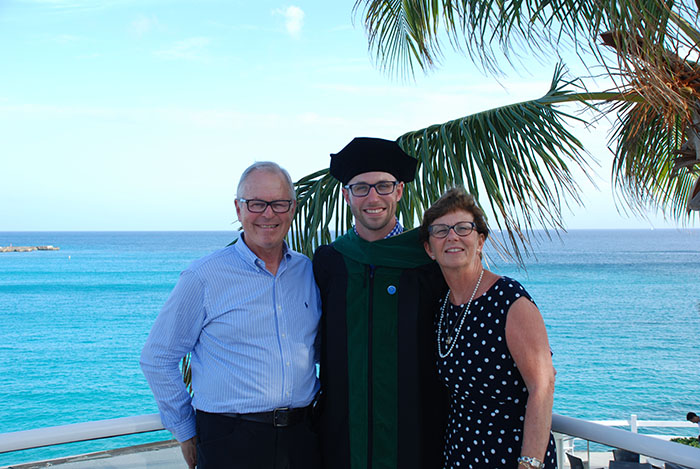 Meet Vlad Haltigin and Cathy Stewart. They’re two business professionals living in Oakville, Ontario, and the parents of AUC graduate Chris Haltigin, MD ’17 (all pictured above). While their son has finished medical school and is now in residency training, Vlad and Cathy can still remember what it was like for Chris after undergrad when he first applied to U.S. medical schools.

In a word? Frustrating.

“Despite the fact that Chris had excellent marks, he wasn’t able to get in to the U.S. schools he applied to,” Vlad said. “He went through the frustration of knowing he had the academic capability to succeed in medical school, but not gaining admission.”

That was when Chris and his family began looking at international schools.

Chris graduated with a 4.0 GPA in health sciences and was in the honors society at Rochester Institute of Technology in New York—while playing Division 1 hockey throughout his college career. It was Chris’s MCAT score, Cathy said, which held him back. “It didn’t seem as though all the other achievements on his resume weighed into the U.S. schools’ decisions,” Cathy said.

Yet his experience is all too common for many dedicated and accomplished pre-med students. As AUC’s Executive Dean and Chief Academic Officer, Heidi Chumley, MD, writes in a piece for KevinMD.com, “Many strong candidates are turned away from U.S. medical schools due to a lack of capacity and the resulting arbitrary cut-offs.” In 2016, more than 53,000 students applied to U.S. medical schools, while only 21,030 were able to enroll. And Chris knew his chances would likely be even slimmer with Canadian medical schools, since he had gone to the U.S. for undergrad.

While Chris was away playing for the Alaska Aces hockey team in fall 2012, Vlad and Cathy attended an AUC information seminar in Toronto. “What we liked was that it was very factual, straightforward, and heartfelt,” Vlad recalled. “Chris had already tried one year of applying to U.S. schools, so he seized the opportunity to apply to AUC. He interviewed and was accepted. I believe AUC took more factors into account when considering him for admission.” 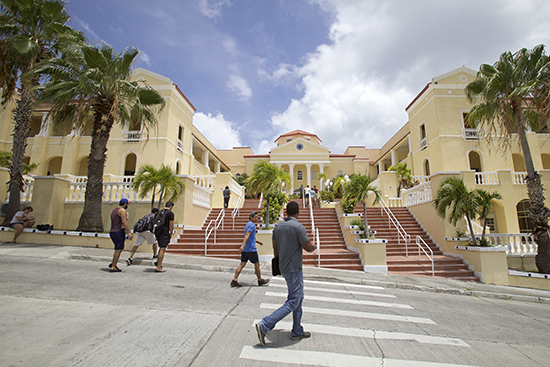 What made Chris’s decision to go to St. Maarten for medical school even more significant was that, in Cathy’s eyes, Chris was always a “home guy.” Cathy explained, “He’s very patriotic to Canada, he’s got a lot of good friends in the Toronto area. He wasn’t necessarily one to venture out too much to travel.”

But as Chris progressed through medical school, Vlad and Cathy found him taking advantage of more and more opportunities that AUC had to offer—including a year overseas. Chris chose to complete his third-year clinical rotations in the United Kingdom, where AUC has affiliations with select teaching hospitals. “We were so pleased and surprised that he did that,” Cathy said. “It was the most amazing experience for him to spend a year in England. He worked in a hospital just outside of London and met some great colleagues from AUC and doctors around the world.”

In addition to completing rotations in the U.K. during medical school, Chris became a peer mentor for pathology classes, and then a head teaching assistant while on the St. Maarten campus. “He loved that he was in an environment where he could not only learn for himself, but also share some of his learnings with others and encourage them,” Vlad said. “I don’t know whether these kinds of opportunities would have been available elsewhere.”

“It’s been a huge opportunity for personal development and lifelong learning,” Cathy agreed.

A Personal Journey, and a Team Effort 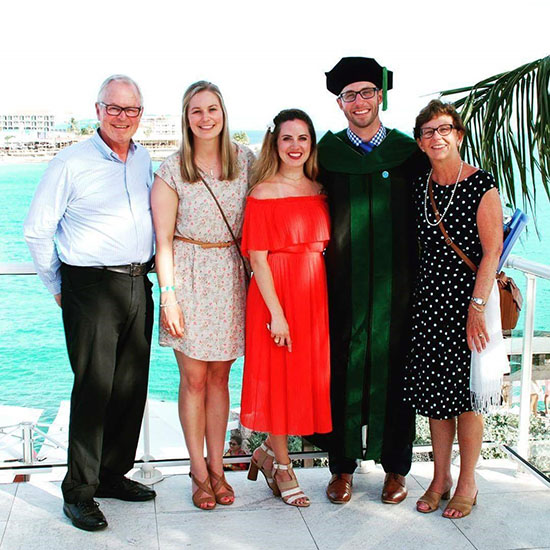 While Chris was in medical school, he and his family were hit with some heavy news: Chris had testicular cancer. Diagnosed in April 2015, he endured surgery, regular check-ups, and a relapse nearly two years later that required chemotherapy.

“It was a situation that nobody foresees,” Chris said. “The residency process is tiring to begin with, and for me, making it through medical school while battling cancer twice is something I’m really proud of. … Between my family, my friends, everyone at AUC, it’s like links in a chain. Without one of those people, I wouldn’t be where I am today.”

Chris graduated from AUC in May 2017 and was one of two students elected to speak at AUC’s Commencement Ceremony. Today, he is an OB/GYN resident physician at Beaumont Hospital in Royal Oaks, Michigan. He had started medical school with an interest in orthopedic surgery, but discovered his love for OB/GYN during his time in the United Kingdom. In addition, he’s continued to mentor others both in and out of the classroom, including being asked by his oncologist to mentor a fellow cancer patient after he completed his chemotherapy.

“He’s had challenges on a lot of different fronts, especially the major setback with his health,” Cathy said. “But he’s a positive, resilient person and he managed to work through it all. We’re very proud of him.”

Blog
Should I Go To Med School?
Many students exploring different career paths often wonder at some point, “Should I go to med school?”. A career as a doctor can be incredibly rewarding, enabling you to make a difference in the lives of others while having a financially secure career, but this career path is not for everyone.
Blog
How to Become a Doctor
The path to becoming a doctor can be difficult, so why be a doctor? Check out this article to learn why physicians were inspired to start their own path to medical school. Read more!
Blog
Bilingual Blogger Urieliz Cintron Shares Tips on Healthy Lifestyles and Medical School
How do parents choose what their kids should eat? It’s a question that sparked curiosity in third-semester student Urieliz Cintron and led to the publication of her recent blog post in AUC Frontline, American University of the Caribbean School of Medicine (AUC)’s independent student-run news site.